Explore the historic Engine Rooms and discover the unsung heroes who kept an icon in motion.

Set amongst the original steam engines, coal burners and accumulators that once powered the raising of Tower Bridge, uncover the fascinating histories of cooks, coal stokers and engineers.

Immerse yourself in this atmospheric space, where exciting interactive displays, films and never before displayed photographs will explore and explain the role of this dynamic workplace at the heart of Tower Bridge.

About the Engine Rooms

The Engine Rooms were once the beating heart of Tower Bridge. Over 80 people were needed to maintain the engines and raise the Bridge.

When Tower Bridge was first built, it raised between 20-30 times a day. Today it opens and average of 2-3.

In 1976, Tower Bridge switched from steam power to electricity. These original steam engines were restored and are now on display in the Engine Rooms.

Discover the people who kept an icon in motion.

Here is everything you need to know about planning a visit to see inside Tower Bridge.
Read more > 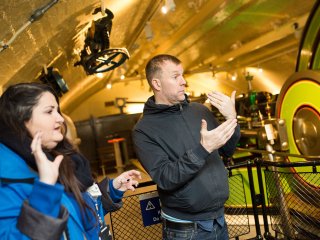 Book a guided tour of Tower Bridge led by one of our expert guides who will bring the iconic structure to life.
Read more > 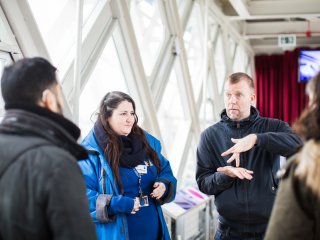 We are open and accessible to all visitors. Discover how to make the most of your visit to Tower Bridge.
Read more >
https://www.towerbridge.org.uk/your-visit/engine-rooms